This is a continuation of my conversation with composer, producer and all-around great person – Alex Somers. He recently finished scoring Captain Fantastic – one of my favorite films of 2016.

Will: Did you always imagine yourself writing music for films or was it a natural outgrowth of writing ambient music?
Alex: It was kinda both because when I went to music college (Berklee), my major was actually film scoring. But it wasn’t like I was dying to score films. I read a lot of books about it but I didn’t really know much about it. When I was 18 and choosing a major, it just sounded interesting. I liked the idea in an abstract way. Then of course for years and years, I have been making more ambient leaning kind of music (Parachutes and Jonsi & Alex). People tell you they think it’s filmic or cinematic or whatever and I guess it’s true. Ambient music tends to lend itself well to working with pictures. It’s less intrusive and it can say what needs to be said without being cheesy and over the top. 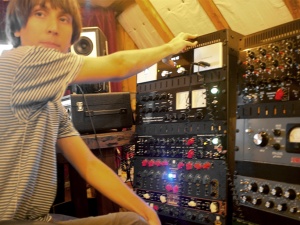 But, one thing that’s important to me is that I don’t want to end up being a composer who does four movies a year and I’m just hustling really hard and that’s all I’m doing. Or, I’m a mixing engineer who mixes an album every two weeks and do that the whole year-round. It’s really important to me to keep all these plates spinning and mix records and produce records and engineer recording sessions and compose music for film and write my own music. If I can keep all this kind of spinning, then I’m super happy because each one is different and you learn different things and you can grow in different directions. They influence each other a lot which is really cool. It’s really common to hustle really hard on one of these and maybe lose a little spark and get burned out.

Will: I’m so impressed by the projects that you’ve worked on like, We bought a Zoo and Captain Fantastic and collaborating with Sigur Ros. I know many musicians and composers who would dream of working on projects of that scale. Do you have any advice for composers who would love to work on bigger projects and to have their music be a part of their livelihood?
Alex: I would say be really ambitious and make your stuff sound amazing. If you can record real strings, even if it’s your friend playing a viola, record it 60 times to layer it up. Use what you can to add character and uniqueness to it; whether it’s a few friends playing or you have to spend lots of money to hire real players. Try to get on the coolest projects you can, if you have friends that are making cool stuff maybe just hang out tomorrow and volunteer to do stuff, even if it’s not paid well. Having management helps too because you can focus on the more creative stuff. Most people think they’re self-managed, but they’re not. No one is doing all the practical stuff that could possibly help. Take risks. Do stuff that’s insane, like way too noisy or way too quiet or way too pop or way too, just do whatever to stretch it. I think that’s probably healthy but I don’t know, I have no idea, I’m still figuring out myself.

Will: I don’t know if you can relate, but one of the reasons I ended up enjoying working with filmmakers is getting stretched creatively. It’s so easy get stuck in a rut creatively when you’re writing music on your own. When you’re starting to write music for a film, you get pulled in very different directions both stylistically and the moods the music evokes.
Alex: Yeah, I just had a similar experience in one of the episodes for that show Vice on HBO. It’s about transgender kids and they wanted a fully electronic score – just lots of synths It was really out of my typical stuff. We have a really beautiful studio but there’s very few synths. I just tend to use a more organic palette. But it was so fun. I think no one would ever know it was me even if they were familiar with my stuff.

Will: Do you see yourself continuing to do a lot of film scoring going forward?
Alex: Yeah, definitely. I want to get better. I just scored a documentary after Captain Fantastic. It’s a black and white documentary made from archival footage. There’s going to be more scoring soon.