Podington Bear is the nom de plume of artist Chad Crouch. I first became aware of his work while listening to This American Life. At the time I was producing a live show that involved video, radio and live narration. Chad’s music struck the perfect tone, but I figured “there’s no way I’d be able to use his music…he’s on NPR and MTV and all these huge outlets”. Oh, how I was wrong. See, Chad is not only a renaissance man in the music world, but he’s also an incredibly kind and generous person. I found out that I could use his music as part of my live show under the Creative Commons license. I also reached out to him several times as I was beginning to navigate this sometimes very confusing world of music licensing. Though as you’ll see, he’s a really busy guy, he always got back to me and helped me figure out the next steps. I’m so glad I get to share with you his work and take a peak into the world of Podington Bear.

What are all the various and wonderful things you do with music?
In terms of my own music, I don’t do that much with it.  I record it and share it as part of a larger library with CC BYNC use terms.  As a facilitator I work with several acts in various roles.  I manage Laura Veirs’ label, I sell Decemberists’ merch, I run a label called HUSH, and I work with a licensing startup called Needle Drop Co.

I know you license a lot of music, but do you do create custom compositions?
Just a few times.  I would like to do more, but now, with not a lot of disposable time, I’m a little picky.

Particular musical inspirations?
Hmmm.  I mostly just listen to the classical and jazz stations these days.  The last thing to surprise me was the new Justin Bieber single “What Do You Mean”.  I really like the way that song sounds.  I never thought I would say that. 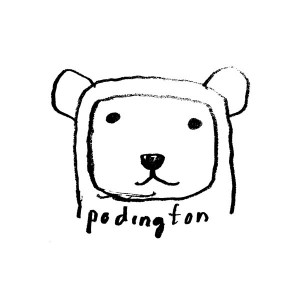 Favorite soundtracks?
I like Michael Andrew’s score for You Me And Everyone We Know.

I know for some time you kept a production schedule, do you make a habit of scheduling time everyday to make music?
No.  Fits and spurts completely.

If you could score any movie out there, what would it be?
It would have to be something intimate and off-kilter.  I don’t have the skills to do something classically orchestral.

Tell us about your set up. What hardware/software do you use?
I have two.  One station is just midi keyboard and headphones.  The other is has lots of acoustic and electric instruments: drums, bass, electric and acoustic guitars, Fender Rhodes, percussion instruments and a larger midi controller and monitors. I use Reason mostly.  But I’m comfortable with Logic and Live.

Can you tell us what you’re working on lately?
Disco!

Sound of Picture has such user-friendly search functions. Do you mind sharing how you were able to get that functionality?
Oh it’s just a database plugin for WordPress.  It definitely took a lot of trial and error.

What advice would you give a young composer looking to make instrumental music for films? Any advice on getting your work out there and supporting yourself financially through licensing?
I think embracing Creative Commons and The Free Music Archive give any young composer a lot of exposure.